I can’t believe that I haven’t made a post since the middle of August. The latter part of summer was absorbed by major family events, and the time just evaporated. Now as winter is approaching, and things have settled down a bit, I’m starting to return to my project bench. The primary project on the bench since summer has been a scratch-built transmitter using two 955 acorn triodes, which is nearly done and currently in the debugging stage.

I’ve got the 955 transmitter to the point where it’s doing something, but not exactly what I had in mind. At this stage of the project I would normally pull out my trusty BK Precision 20 MHz dual channel oscilloscope and start poking around, so that is exactly what I did. Hmm.. oscillation, that’s good, frequency, way off, not so good… – and then, suddenly, nothing. No trace, just the horizontal sweep. I tried different probes, different channels, different signal sources, all to no avail. My old friend was kaput.

I’ve had that scope for about 15 years. It was an eBay purchase, about $80 shipped, and at the time it was a really big deal, being my first oscilloscope ever. The 20 MHz bandwidth was just adequate for working on 40 meters and down, at 20 meters you could see a signal, but no real detail. 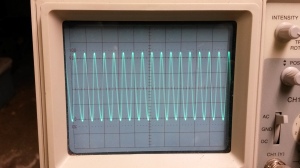 However all the bits worked, both channels, and it became an indispensable tool on the bench for scratch building, troubleshooting, and general electronic poking about.

So, when I had thoroughly convinced myself of its demise, two thoughts flashed through my head:

Nope, if I’m going to replace it, I’m going to get a real scope like they talk about on Soldersmoke. One of those fancy digital scopes that does everything. I mean, how often do you upgrade your oscilloscope? This probably is my big chance.

I took a look on the web, and in pretty short order zeroed in on the clear choice (or at least it seems so to me) for a hobbyist level digital scope: the Rigol DS1054z. There are numerous enthusiastic reviews to be found on YouTube, such as this overview, and this in-depth review. Pretty much everyone seemed to agree that in terms of features and performance per dollar, you can’t beat this scope. I’m not going to detail the positives here, you can check out the links, but basically a 4-channel, 50Mhz scope with a large 7 inch display is pretty deluxe.

It took a couple of days to convince myself this was the right choice, and a couple of days after that an alarmingly large box from Amazon arrived. No worries though, the scope is actually only about the size of a large-ish lunch box. It was just very well packed.

It was a few days before I had the time to sit down and get acquainted with my new scope. I watched a bunch of YouTube videos to get familiar with the front panel operation for typical tasks. It became pretty obvious that I had traded my skateboard for a muscle car – this device will do any task I might ever need, and a whole bunch more that I won’t. Debugging 40 meter QRP tube transmitters – no problem.

One of the features of the new scope that absolutely captivated me is the ability to provide a frequency domain display via an FFT function. I have built a lot of scratch built QRP transmitters, and have dutifully added low pass filters to the outputs to insure adequate spectral purity. But up till now I have never been able to look at the output of transmitters to see if they meet the FCC requirements. This was the first thing I had to try.

For my test subject, I chose a Michigan Mighty Mite I built a few years ago (because it was featured on Soldersmoke BTW), to which I had added a 7-pole LPF from the recipe by George Dobbs, G3RJV. I have actually had this rig on the air, but was it okay? Now I know…

The waveform coming off the output link is pretty crufty, as you can see in the photo below: 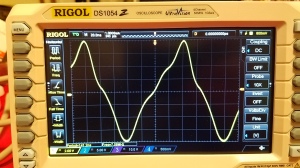 but the output of the LPF looks pretty good: 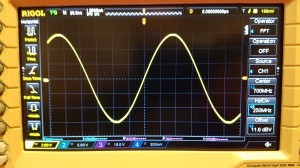 Now, to the magic of FFT. The unfiltered signal looks harmonic rich, and those spikes are only about 10db down – not good 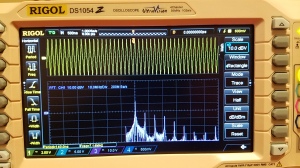 The dirty secrets of the unfiltered signal revealed

But the output of the filter is very clean: 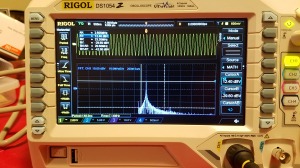 Signal cleaned up, and measured with cursor feature

Only a small spike at the third harmonic. Using the cursor feature of the scope (yes, it has cursors! <arm pump/>) I measured the 3rd harmonic at 42db down – just making the FCC spectral purity regs. I can sleep at night again, knowing my MMM will not be polluting the airwaves, when and if I ever put it on the air again.

One controversial aspect of the DS1054z is the fact that the scope hardware can support more features than the firmware allows; you can field upgrade you scope to higher specs by purchasing a license key from Rigol. The extended capabilities include among other things: 100Mhz bandwidth, more capture memory, and software decoding of communication protocols like RS-232 and I2C. That latter sounds interesting to me, as I have done a bunch of Arduino sketches using I2C – it could come in handy. 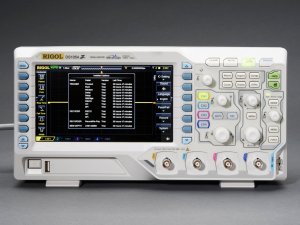 The scope ships with all the extended features enabled for the first 40 hours of operation, so you get hooked on using them. Then they expire and turn off. The license keys from Rigol are quite expensive, you could nearly double the cost of the scope by purchasing a key.

Here’s the controversial part: it is very easy to hack the scope. A quick web search will return numerous YouTube’s, blog articles, and links on how this is done. I’m not going to provide any links here, if you are interested, go look. But lot’s of folks just unlock all features (you will hear about this a lot on YouTube how-to videos concerning teh DS1054z), but there is a down side: hacking the scope voids the 3 year warranty.

So I’ve decided not to hack – but to wait. If I find one of the extended features is a can’t-live-without, or it’s three years from now and the warranty is over, then maybe. But for now, what the firmware allows is more than enough scope for my needs.

And what will happen to my old BK? Well I thought about it, and decided that the odds were low (and the returns not worth it) that someone might want to buy a broken 30-year-old scope at a hamfest. I certainly don’t want to undertake troubleshooting it myself, and it would not be worth investing any money in a professional repair. So with the absolute minimum amount of sentiment I could muster, I brought the slightly rusted but beloved instrument to that big recycling center in the sky. (Well, actually near Oneonta)