This post is all ham radio, with the emphasis on home brewing. About as far from Linux as you can get.

As I have mentioned earlier in the year, I am a bit obsessed with the idea of home-brewing a tube QRP transmitter. This all started with the fortuitous (or not) acquisition of a really beautiful Hickock 6000A tube tester, for a ridiculously low price, at our clubs annual swap&sell auction. If you have a tube tester, you must have to play with tubes, right? In fact, it came with a bunch of NOS, really nice tubes. My fate was sealed.

Although I actually did find a circuit using one of the tubes (a 6SN7) that came with my tester, I decided that I didn’t have enough expertise to make it my first foray into tube building. The circuit didn’t have an integrated power supply, and  it came with annotations like “this connection is wrong, it will put high voltage on the antenna line…” This one is best left for someone who knows what they are doing.

Instead, I gravitated back to an old friend: the W1TS “Simple Transmitter” presented in October 1968 QST, which later was featured in an ARRL introductory volume entitled “How to Become a Radio Amateur”. This two tube transmitter was presented a an ideal first project for the budding ham. It featured:

You could build it on a metal chassis, or even a wooden slat frame (as long as you carefully avoided the HV lines while operating.)

The original article and schematics are freely available on the web, in fact I had come across it before during previous, less serious periods of tube obsession in years past. It seemed like an ideal candidate.

This time around, I came across a wonderful resource for this transmitter – an article by Ralph Taggart, WB8DQT, describing his modernization of this venerable circuit. In the form of a downloadable PDF, Ralph provides an updated schematic, a complete bill of materials (you can get all the parts online from two or three suppliers. I had my complete parts kit in about a week!), and helpful assembly hints and safety tips. A thorough, beautiful package!

In addition to providing a modern parts list, Ralph incorporates several important circuit changes, born out of his research using modern crystals instead of the massive FT-243’s, and out of safety concerns. I won’t detail them here, go download the article if you are interested. Even if you aren’t going to build the rig, it is a worthwhile read.

So my transmitter project has been going on for about three weeks now, and I will state at this point that my respect and admiration for the budding hams of the 1960’s has grown enormously, based on what they had to do to just get on the air.

The first step was to acquire the parts. This was easy given the b-o-m Ralph provides in the article. With only one or two easy substitutions I had my parts together from Mouser, Antique Electronic Supply, and National RF. A visit to a well-timed ham fest in the area provided a better, cheaper meter than any I could find online.

Then came the metal work. This proved to be quite challenging, on several levels. All of my homebrew efforts to date have been using “Manhattan style” construction. This is a technique where you glue down little bits of copper clad board to a big piece of board, and string your components between the little “islands” you create. It’s great, very free-form, not a lot of commitment. If you run out of space in one direction, just turn 90 degrees and keep going. I really like it, and generally lay out my projects to look like the schematic.

This transmitter was different. There is a metal chassis involved, and it is one of the most expensive parts. As I unwrapped it and gazed at its pristine surface, I clenched at the idea that I was going to have to make holes in it, and at the right spots, and that I couldn’t move the holes once they were made if I later discovered that they were in  un-advantageous places. This was paralyzing.

So I took several deep breaths, and devised a strategy that allowed me to continue. I got some graph paper, and made a slightly smaller (80% reduction) sketch of the chassis area, and started laying out the parts on paper. I measured the approximate amount of space the switches, connectors, meter and variable caps would take, the footprint of the transformer and the tube sockets, and tried to draw the layout. It was not high art, and went through many iterations, but very confidence-building.

Ralph’s article states that the exact layout is not critical and offers some suggested guidelines for laying out the parts. I tried to follow the guidelines, and came up with a layout slightly different, but not unpleasing to the eye.

Then there was the matter of making holes. I have a few chassis punches, either purchased for earlier projects, or acquired in a brilliant deal made at a yard sale in southern New Jersey two years ago, but as it turned out I did not have quite the right assortment to make the hole sizes I needed. Ralph’s article suggests the use of step drills, those conical-shaped drill bits that have graduated sizes in a stack.

Back to eBay and Amazon, and within a few days I had the necessary hole making implements. It turns out these drills work surprisingly well in soft aluminum, I definitely recommend them as a cheaper alternative to a collection of chassis punches. The article also mentions a nibbling tool for making the rectangular hole needed for the AC receptacle. I happened to have one of those, and it did come in very handy indeed.

After a long afternoon of sheet metal work, my chassis looked like this:

Holes, from the front 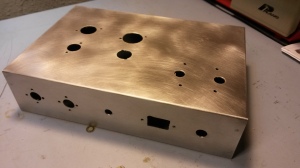 Holes, from the back 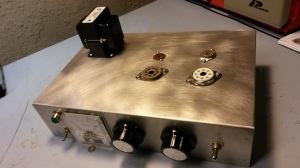 I am quite pleased with how this stage of the project has turned out, now bravely on to the point-to-point wiring.