My current obsession with operating portable outdoors has driven this post to the ham radio side again. No computers, sorry.

Well I have made progress with the internal lithium batteries for the KX1. After a great deal of rummaging about, I came up with a tiny in-line fuse holder and fuse, which could be shoe-horned into space of a single AA battery. It came from a defunct battery charger, and I believe the fuse is about 1.5 – 2 Amps, certainly in the ballpark for use in the KX1 supply. I soldered the heads from two brass machine screws, with washers, to either side of the fuse holder, and crammed it into two pieces of vinyl tubing. Here’s what it looks like in the KX1 (center battery holder on the left):

Above and below on the left you can see the dummy cells I talked about last time. On the right are the three NiteCore 14500 750 mah batteries, which with a fresh charge read just over 12 volts in the KX1. They are indeed a tight squeeze, having a diameter slightly larger than a standard AA cell, so it was necessary to cut off the plastic retainers on the top and bottom of the right cell holder. You can see the retainers still in place at the bottom of the left side in the picture.

Also if you decide to make this modification, take note: There are lots of NiteCore batteries out there that look exactly like AA batteries in the catalog pictures, but are actually the size of a small banana. You want the model 14500, 750 mah ones. I was not so careful ordering, and had to return the first bunch of enormous cells.

Self contained power taken care of, the next concern for rustic operation was antennas and antenna supports. After a lot of experimentation, I have settled on the end fed wire style of antenna as the most effective approach. These antennas only require a single point of support, and there’s lots of options for matching them to your rig. My KX1 has the built-in antenna tuner, and actually doesn’t load a precisely cut end fed half wave terribly well, but it does a good job with a “random wire” cut so as not to be an exact half wave multiple on any frequency of interest. My standard setup is a 42 foot wire, fed against a 16 foot counterpoise. This combination loads easily with the KX1 tuner on 80/40/30/20 meters, the bands supported by the KX1. I have also read about an 85/17 foot combination that folks report good success with, but I have not tried this yet.

So the antenna doesn’t cause much of a bump in the backpack, but then there is the support. Basically the strategy is to use available trees, if any, along with some portable support you carry along for those occasions when no convenient trees present themselves. For this purpose, I use a 20 foot telescoping fishing pole, called a “crappie pole”. The whole thing weighs a pound or so, collapses to a 4 foot length that can easily be mistaken for a walking stick, and sets up in seconds. The challenge is how to support it in a vertical position.

I have read descriptions of using handy rocks to secure the base of such a pole, but it seems to me that if the convenient trees have left town, the handy rocks have probably left as well. Not wanting to leave anything to chance, I have come up with a light weight, easy to pack guying system for my crappie pole. 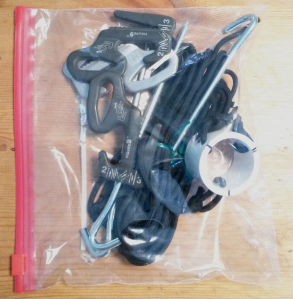 Guy kit all packed up 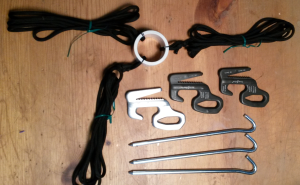 The kit consists of a section of pvc pipe, three lengths of para cord, three mini tent stakes, and three line tighteners sold by Nite-ize, called Figure 9s. The line tighteners are an indulgence; if you can reliable tie a taut line hitch you can do without, but unless I am facing in the correct direction with respect to the line and there is no wind, I always screw that knot up. Here’s what it looks like deployed: 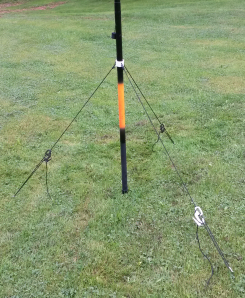 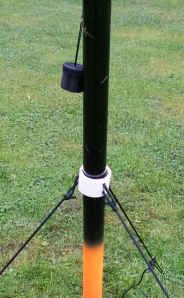 Close-up of guy ring on mast

This works any where you can push the tent stakes into the ground. If you can’t, there are probably a lot of rocks around anyway. 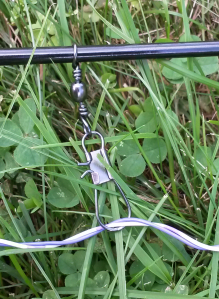 But what if there are trees? How to get the wire up into a branch? I have read of people using a partially filled water bottle as a weight and throwing the wire over a branch. Up until recently, I used a large metal nut as a weight, and launched the wire by swinging it, bolo style, and letting go at the right moment. Timing is critical, but usually I can get the wire end pretty high up after 20 minutes of flinging.

One problem with this approach is the tendency for the nut to wind the wire end tightly around a branch, making it impossible to get the wire down without losing a bit and/or removing the branch. I recently came across a suggestion on how to avoid this. I apologize that I cannot give a reference for this idea, I don’t recall where I saw it or if it was a word of mouth suggestion. I do want to pass it along though, because it works beautifully.

You start with a golf ball. Drill a small hole, and thread in a screw eye. The modified golf ball is your weight. Tie a small loop using 4 pound test line connecting the end of the wire, and fling away. Now if you get hung up in the tree, a sharp tug causes the weak monofil to break, and the wire and the golf ball fall from the tree. This really works.

To try it out I set out to our local Walmart, to find some golf balls. I am not a golfer. I wanted brightly colored ones if possible, I had this notion that “practice balls” were made in neon colors. And, of course, I wanted the cheapest balls possible, given the use I was going to put them to.

Walmart had an extensive selection of fancy, expensive, hi-performance golf balls. The least expensive ones I could find, which coincidently were neon yellow, where branded with America’s favorite sponge, SpongeBob SquarePants:

SpongeBob as found in nature

Okay, well they were cheap and also neon yellow. As applied to the end of the antenna, SpongeBob looked like this:

And worked precisely as advertised. Here is an inverted L configuration, using the crappie pole AND a convenient tree, put in place by SpongeBob himself: 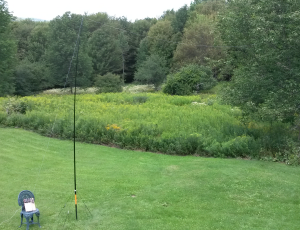 Operating position, all set up

How well did this work? Using the KX1 running 2.5 watts with the onboard lithium batteries and the inverted L, I was definitely getting out on 40 meters that day. Here’s a log from Reverse Beacon Network:

And of course, clean up was a snap. One tug on the wire, and SpongeBob dropped obligingly into the weeds below, his neon yellow smile easily found.

2 Responses to Aerial ballet with SpongeBob