Back at the beginning of November I happened to be in the local Barnes & Noble bookstore on a Sunday afternoon, when I noticed signage for the “Mini Maker Faire” event B&N was holding the following weekend. My initial reaction was: “not that interesting”. I had attended the big Maker Faire at the Hall of Science last year, it was fine, very focussed on 3D printing and robotic oriented stuff. For me, not worth a repeat visit.

But then, as I was leaving the store, I saw the phrase “signing up new presenters every day” on the announcement board. That piqued my interest: would they want a demonstration of a ham radio “maker” project?

Left to my own devices, I would have left the store still pondering this question, but for my wife’s prodding to go ask a manager. I did, and they were interested. In fact, the store personnel I spoke to mentioned that although they had reached out to local schools looking for presentations, they had gotten very little response. I got a call the following Monday from the store manager, made my pitch, and was put on the schedule for the following weekend.

The next thing to do was to reach out to my local radio club, PCARA, and see if there was any interest in participating in the presentation and supplying collateral material about Amateur Radio, and our club. I got an enthusiastic response, and checking back with the folks at B&N got permission to display and hand out ham radio materials – I thought this was pretty generous of them.

The project I had to demonstrate was a pretty good fit for a ham radio “maker” project.

Called the Digital Fist Recorder, it is an Arduino based device that records and plays back CW sent with a straight key, cootie key, or bug, exactly as sent – thus exactly reproducing the “fist” or sending style of operator. 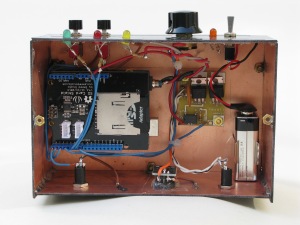 DFR under the hood (arduino stack on left, keying circuit on right)

I had written an article on the project for QST Magazine, which had just come out in the November issue, so the timing was perfect.

In the presentation (done at three sessions from Friday evening to Sunday afternoon), I touched on

The presentations went well, I gave out several handouts and lots of interest was generated. 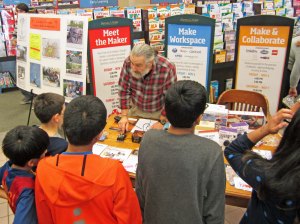 As part of the demonstration, I knew I would have people wanting to try out the Morse code key, so part of my preparations included selecting a key that would stand up to being used by folks not familiar with the art of radio telegraphy. I have a lot of keys, and I am rather fond of all of them, so I put particular effort into selecting a key that would be robust enough to withstand any unintentional abuse. After much deliberation, I chose my D-117/K5 “Chinese Army Key”. 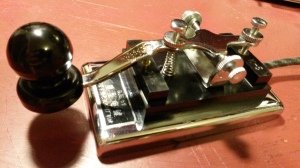 It is very heavy, solid steel with hard brass and steel contacts. While not my favorite for daily use, one gets the impression that you can bang the hell out of it without complaint.

It performed marvelously, survived without a scratch, and acquitted itself well in the hands of several young kids who learned to send their first names in Morse Code.
And it reminded me of another Chinese key that I own, one that I liked very much, that had met its demise at my own hand about three years ago.

The other key was a K4. This key was manufactured for the PLA in the 1960’s, and was readily available on eBay and at Morse Express for very reasonable prices. In recent years the original source of the surplus keys has dried up, but they are still made at the same plant in Changshu, and are still available today but at much higher prices.

The key featured a very heavy cast iron base, shrouded in a highly chromed steel jacket. A steel lever, supported by robust posts, pivoted on jeweled pivot bearings, and featured large silver contacts. It has a very good feel, and stayed put on the desk.

I liked this key so much that I was using it in the November CW Sweepstakes three years ago when, while rearranging things on the operating desk, I knocked it off. The key hit the ground lever first, and shattered the bakelite pedestal that supports the lever. I couldn’t bear to discard the parts, so I just put them away in a box at the time. Playing with the K5 made me nostalgic for the K4, checking current eBay prices for the key made me consider a repair job.

Examining the parts of the broken K-4, it was apparent that the breaks were clean and tight-fitting. Not too much shattered material had been lost in the break. The key was a likely candidate for a glue repair.

I wanted a glue that would have extremely high cured strength, and some ability to fill in the broken areas. A two-part epoxy seemed to me to be the most likely candidate.

The epoxy should have a very high cure strength, and since the key had been broken for three years, I didn’t think a rapid curing glue was needed. I went searching the adhesive department of our local Home Depot, pondering over the many two-part epoxies available, comparing cured strength, cure time and color to select the most appropriate.

As it turned out I didn’t find a slow cure epoxy that would work; the only one they had was opaque white in color, definitely not a good choice. Second runner-up was Gorilla Glue two-part epoxy, with a 5 minute cure time, which is clear and boasted the highest cured strength. The short cure time was not an advantage in this case, as it meant that all the positioning and clamping had to be done quickly.

On the same visit, while cruising the tools section, I found a new item that I can’t recommend highly enough – DeWalt now makes tiny trigger style clamps, for only about $5 each. These are perfect for clamping small repairs, and I picked up two to supplement the other small clamps in my armamentarium.

I knew that the success of the repair depended on absolute flatness of the glued bakelite block, and good end-to-end compression of the break while the glue set. To achieve this, I used clamps at 90 degrees to each other – two to hold the base flat, and one to compress the glue joint. I needed a flat surface to clamp to. As it turns out, I recently bought at a thrift store a picture frame fashioned from two thick blocks of plate-glass. I intend to use this for some crystal grinding experiments, but in the mean time it made the perfect support for the glue job.

To avoid the embarrassment of gluing my repaired bakelite part forever to the glass block, I covered the block in plastic cling wrap. I figured that even if the plastic wrap clung to the glued joint, it would be easy to pick off. Or at least easier to pick off than the thick glass block.

The last concern I had was the inevitable bit of glue that squeezes out of the joint and sits on the surface, creating a bead that follows the path of the break. A little research suggested that using acetone or mineral spirits once the join was clamped would remove the bead. I had acetone on hand, and am pleased to report that this trick worked perfectly.

That last step is the hardest, but you really need to allow the epoxy to rest undisturbed for a good while to reach full cure strength. Anyway, the key had been on the disabled list for three years, so what was the rush?

After the curing time was over, the bakelite base came off the block easily, and it was no problem to pick off the clingy plastic. I then re-assembed the key, and had to deal with the matter of the conical spring.

Unfortunately, the original conical spring was lost. Whether I lost track of it when the accident occurred, or it got away during captivity in storage is not clear, but it is definitely gone. A quick check of internet sources for conical springs shows that:

Not wanting to invest that kind of money in a world class conical spring collection, I looked to other venues. Morse Express sells replacement springs for Nye-Viking keys; I ordered a couple and although they are very nice, they are much too small for the K4.

I then took a look on eBay for either springs, or busted keys with the springs still attached. I found an auction for three springs that were a bit larger. These turned out to be usable (it’s what you see in the photo), but I am keeping my eye out for other possibilities in the future. 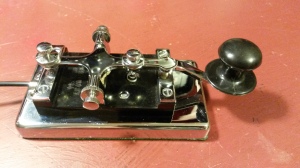 The K4 key, after repair

All in all, the repair was a great success. The key handles just as it did before the disaster, and I’m really pleased to get it back in service.

1 Response to A key repair.