This past January, I became aware of a new event celebrating the vintage rigs popular in the 50’s, 60’s and 70’s, the Novice Rig Roundup. I love the tube rigs from that era, and absolutely had to put together a station and join in.

I already had on hand a few transmitters capable of the job: two QRP 2-tube rigs based on a classic MOPA circuit (you can find links to several on this page), and a Knight T-60 kit built transmitter. The T-60 was particularly appropriate, as it was designed to operate at less that 75 watts input, making it the perfect Novice transmitter.

I operated all of these transmitters under crystal control, and after a week of trying to make contacts, gained real respect for those ops that learned the ropes that way. For someone who was licensed well after solid state transceivers were the norm, operating a separate transmitter and receiver, constrained to a single frequency, was a real challenge.

Back in the day, ops would call on their crystal frequency, and then listen up and down the band for a reply. In the modern world of automatic zero-beating and narrow passband filters, being stuck on one frequency just doesn’t work all that well. After a week of not too much success, I was determined to add a VFO to my vintage station. Operating with a separate VFO, in addition to a transmitter and receiver, does complicate things a bit.

Separate transmitter/receiver stations always involve some kind of switching arrangement if a single antenna is used for both components. These can range from a simple toggle switch connecting the antenna to either, to automatic RF-sensed switching which allows for full break-in operation. (Full break-in, the ability to hear the receiver between the elements of the Morse code characters, is what we are used to in modern transceivers, and there are a number of commercial, kit, and homebrew solutions to provide this kind of switching for separates.)

Adding the VFO to this mix increases the complexity a bit, because of some of the characteristics of VFO operation. Unlike a crystal oscillator, which does not provide a signal until the transmitter is keyed, a separate VFO can run and be keyed independently of the transmitter. The VFO can run continuously, or be keyed on and off in synchronization with the transmitter. Both methods offer advantages and disadvantages.

Allowing the VFO run continuously, and just keying the transmitter, will undoubtedly produce the most stable oscillation. The VFO will drift less, and show no start-up instability on each keyed Morse element. However, there is an odd side-effect to this mode of operation: something that was known as “backwave” back in the day. Suppose you hear a signal in your receiver and want to reply, by tuning your transmit frequency match exactly (this is called “zero-beating” the signal.) With the VFO running, you will hear your oscillator in your receiver (if it is not muted) and the tone, the backwave, will blot out his signal. You won’t hear him.

Also, if you are relying on listening for your transmitter in the receiver while keying as way of providing a sidetone, the backwave will either obliterate your keying, or make it sound weird. So all in all, the “let it run all the time” approach is not too desirable.

The alternate approach, that of keying the VFO in synch with the transmitter, is the one that was most often used. In this scenario, the VFO running only during the times you are actually transmitting a Morse element – sounds ideal, right? Except there is an issue that arises in this case: chirp. The VFO, when transitioning from off to stable running can exhibit slewing of the frequency. This “bird-whistle” effect is called chirp, and is the hallmark of a poorly run station.

Operators would attach a “C” to your RST signal report to indicate there was chirp on your signal, and if it was really bad and you were noticed by an Official Observer (OO) station, you could be the recipient of a dreaded “pink slip” notification to clean up your act. Chirp on your signal is to be avoided at all costs. I’ve had some direct experience with this phenomenon. I had a Heathkit HW-16 transceiver coupled with a HG-10 VFO. The thing chirped like a cage of finches. It was one of the reasons I finally sold the rig.

There are a few things that can be done to minimize or eliminate chirp with synchronized keying. One is to run the VFO on its own power supply. Another is to allow the VFO to stabilize before keying the transmitter, and to un-key the transmitter before the VFO. Some tricky timing is required. This approach was first explored in tube circuits in the 1950s, and paved the way for modern transceivers with internal T-R switching.

Living in the 21st century and having access to cheap and efficient microcomputers, it is easy to shift the keying into the future, by introducing delays between keying the VFO and the transmitter. This is the idea behind my VFO-friendly switching system, the T-R Time Machine. 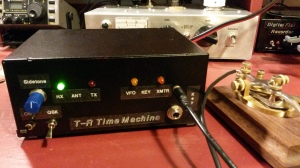 The external event of closing the code key drives a chain of events that put the signal on the air lagging the keying by a few milliseconds, but always keying the transmitter only when the VFO is in stable oscillation.

The sequencing works slightly differently depending on whether you want to be able to hear signals between the elements of your sending. This mode, called QSK (one of those Morse code signals meaning “I can hear you if you interrupt”), will wind up transiting between transmitting and receiving several times a second as you send. Non-QSK mode (for want of a better term,) keys flips the antenna and keys up the VFO, and leaves you in that state while you send. The station remains in transmit mode for a fixed “hang time” after the last Morse element sent, before flipping back to receiving. The T-R Time Machine can manage either mode.

In non-QSK mode, the T-R Time Machine starts the VFO, delays a couple of milliseconds, and then starts keying the transmitter in time with the external keying. The VFO runs continuously, but the receiver is muted so you do not hear the backwave. After the hang time has elapsed since the last keyed Morse element, the station is sequenced back to receiving. The hang time is set to be just a bit longer than the typical pause between phrases, to minimize the amount of switching.

The first morse element is robbed of a millisecond or so of duration, but at 25 WPM that amounts to about 3% shorter, and only the first transmitted element is affected. It is completely unnoticeable on the air.

QSK mode time-shifts your keying by a couple of milliseconds, so the keying the transmitter lags the keying input. On key up, the VFO runs for a millisecond or so past the unkeying of the transmitter. The effect is to slow the output keying very slightly, but again it is unnoticeable on the air.

My Arduino sketch re-uses some code I had written for the Digital Fist Recorder project, but adds a new concept to control the keying: a coding device called a Finite State Machine. Using this approach, you model the process as a series of states. Each state performs some logic on entry, and based on current conditions, decides how to transition to the next state. Organizing the code this way makes it very easy to maintain. The switching tasks, things like key down, VFO start, transmitter start, etc. lend themselves nicely to representation in the code as discrete states, and the resulting code is quite clear to follow.

I have not yet posted the code to GitHub, but intend to do so, and will post an update here when it is availble. As always I am releasing this code as open source under a GPL license.

Building the TRTM naturally divided into to two phases: the easy part and the hard part.
The easy part was building the boards containing the Arduino and switching components. The TRTM consists of several pre-assembled components:

In addition, there are two voltage regulators which I built using ICs and Manhattan style assembly. One regulator drops the input voltage to a regulated 9 VDC to run the Arduino. The second provides a regulated 5 VDC to run the relay board and the Key-All modules. In early prototypes of the TRTM I ran into difficulties sourcing enough current from the Arduino to run the outboard switching components; this version sidesteps the issue.

The hard part for this project was fitting all the components, and the large number of external connections into an enclosure. I went through three iterations before settling on the version shown here. The project required:

Drilling all those holes in the right place proved challenging (you can see the extra holes in the boards, and on the bottom of the enclosure where I had to move things around.)

An additional feature in the latest enclosure is the complete isolation of the switching circuit from the Arduino, to avoid RF feeding back into the computer and causing issues. I accomplished this by mounting all of the switching connections (the antenna and phono jacks) on a panel made of polycarbonate plastic. This material is inexpensive, and easily machined with ordinary hand tools.

The plastic plate is mounted on the back panel of the aluminum enclosure through oversized holes, so the switched grounds are completely isolated from the enclosure ground. Actual switching isolation is provided by the use of relays, and the Key-All units which are opto-isolated from the control circuits. 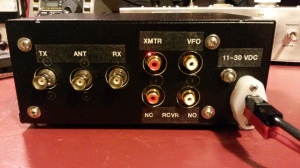 This project was difficult to complete. In addition to all of this drilling and screwing was the difficulty I had getting the LEDs to work. Yes, I was not able to light an LED using an Arduino…

It plagued me for weeks, until I finally sat down and carefully stepped through the code to discover that I had never initialized the digital pins used for the LEDs as output pins in my sketch. Silly code bug, but it really drove me nuts.

So I finally have a very nice, working, VFO-enabled T-R sequencer ready to go. Unfortunately, I still haven’t gotten a VFO to work properly with my Knight T-60, but that will be a story for another day. Until then,