Almost exactly three years ago, super storm Sandy made landfall in our neighborhood, with devastating results. While we did not suffer much damage compared to many others, we were without power for fourteen days (a record for us) and a tree struck the front of our house, doing serious damage. Among other things, my antenna system was completely erased.

It wasn’t a big commercial antenna or tower or anything like that. I have always used simple wire antennas, supported in various ways. At the time of the storm, I had a mast attached to the second story of our house, supporting the apex of a doublet hung in a sloper configuration, and fed with 450 ohm window line. Pretty effective, and very cheap.

The mast was composed of those four foot fiberglass mast sections you can find on eBay. I think I had six or seven sections of the stuff hooked together, which starting from the second story of the house gave me about 35 – 40 feet at the apex. The mast was attached with brackets to the clapboard side wall of a dormer extension.

These mast pieces were never intended to be used to construct a tall mast. My understanding is that their intended purpose is to be used, one or two pieces together, to support camoflage netting. You know, when they hide airplanes under a lot of fake foliage. And I can attest to the fact that they don’t work very well for tall masts. I once tried to make a 40 foot mast out of the stuff, and attempting to get it vertical was a complete failure – rather like trying to stand a stack of cooked ziti on end. Al dente, of course.

Anyway, in the aftermath of Sandy I had nothing left but a pile of mast pieces and some tangled wire. In the days that followed, I scavenged the still usable bits, and put up a shorter version of the same arrangement, minus one piece I think. This second incarnation was liberally reinforced with Gorilla tape, and was splinted with four pieces bamboo around one particularly dodgy joint. (We had a lot of cut bamboo on the property, but that is another story for some other time.) The slightly crooked, splinted, shorter mast proudly adorned our house for about two years. You can guess that we don’t live with an HOA. My wife. God bless her, is very tolerant and allowed me to continue to persue my radio interests with this abomination attached to the house, but I must admit that even I would occasionally look up and mutter “got to do something about that antenna…” Oddly enough, when I looked for some pictures of the splinted version I couldn’t find any. I guess we didn’t think it was that photogenic.

In any event, last winter, which was very severe, finaly brought the matter to a head. After a particularly bad storm later in the season, the top of the thing snapped off. Ironically, it was the join above the bamboo splints that failed. I took it down again removed another section, and refreshed the duct tape. It was abundantly clear at that point something had to be done.

Over the summer, I started shopping for a new mast. No point in waiting, get it done while the weather is good. I dithered about comparing lots of different masts on the internet. It didn’t need to be very tall, since it would be attached to the house, but I wanted something very sturdy; a telescoping mast would be fine, but it couldn’t be one of those lightweight portable jobs. No kite poles for me, it had to have some gravitas.

I finally settled on an MFJ-1904HD mast, which is apparently designed to hold five element 80 meter monobanders and the like. I found a pretty good deal on the mast, (including free shipping, which surprised me. I was afraid of the shipping on somehing like this.)

The mast arrived surprising quickly. Next step: wire. I have always bought my wire from The Wireman, and I highly recommend them. I decided to replace what I had up with all new materials, so I bought sufficient wire and window line to redo the whole thing. After I placed the order, I realized I hadn’t ordered quite enough wire, and called them. They adjusted the order without any fuss. Is is a delightful business to deal with.

With wire and mast on board, I waited for a weekend when we would be home based to do the work. On the first such weekend, I climbed to the sunroom roof, only to discover that the brackets on the existing mast were woefully too small for my new, robust mast. Back to the internet, to find bigger brackets. This proved tough – in the end I found only one bracket, made by Rohn, which could handle the diameter of my new, robust mast. I ordered them. They were backordered. We were out of town for a few weekends.

The weather was glorious, a perfect October day. And my younger son was available to help with the roof work, a major plus. 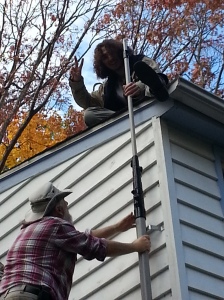 I tried to plan out all the steps of the job: things had to be done in the correct order since I intended to use the mounting hardware and antenna center insulator from the old doublet in the new antenna. Here was the breakdown:

As simple as that.

Remarkably, all this went totally smoothly. Nobody got so much as a splinter – I cannot express my gratitude sufficiently. And for some reason, this project did not require the usual three trips to the hardware store.

The new wire antenna is a 135 foot doublet, fed by window line. While not exactly resonant on any ham band, it loads easily on all the bands with a tuner. It is a popular configuration, if you Google it you will find dozens of write ups on it.

I measured my wire (two 67 foot lengths) by putting two tent stakes into the ground 11 feet appart, and making six turns around the stakes, plus a foot or so. Then I wrapped the wire around rectangles of corrugated cardboard to keep it out of trouble until deployed.

Hard to see wire staked out for measurement

The center insulator is a device called a Ladder-Loc, which is designed to support the window line and reduce stress on the the wire-to-feedline connections. The one I have has been in use for over four years – it is a little faded from exposure, but in fine shape and back in service.

When I reconnected the wire ends to the support ropes and pulled them up, I realized something interesting – the old antenna had been much shorter than 135 feet. I thought what I had was a 135 foot doublet, but it turned out to be about 90 feet. I dimly remember doing a lot of calculations to come up with a good doublet length because I thought 135 would not fit in my lot. Apparently I was wrong, and am absent minded, but to good effect.

I didn’t make the final connections back to the shack until the sun had set. The new antenna loads easily on all bands, and despite the prediction of a geomagnetic storm this evening, 80 and 40 meters sounded lively. I’m totally thrilled that this job is done, and not a flake of snow has fallen yet this season. I’m looking forward to a winter of sitting snug in my shack, playing radio with a beautiful piece of wire up in the air.
73,
de N2HTT