I’ve been spending a lot of time messing with VFOs recently, both vintage tube units and modern digital synthesis projects, all driven by the quest for frequency agility with homebrew QRP rigs. My favorite homebrew transmitter is the 2-tube W1TS rig, which has stubbornly resisted cooperating with an outboard VFO. Even Ralph WB8DQT, the author of the project, states in his documentation that VFO operation was not a design goal for this lovely little transmitter. I wholly agree; I have tried with a number of VFOs and a few different interfacing techniques, and I haven’t been able to get sufficient drive from an external VFO. The thing is just much happier with a crystal in its socket.

A while back, I had a thought: why couldn’t you add the parts necessary to create a VXO circuit around the crystal, and plug that VXO circuit into the crystal socket? You’d get some variability with a crystal driving the 6C4 oscillator. It should work, right? I tried putting together such a circuit, which never did work, since I didn’t have any clue what I was doing. It went on the pile of unsuccessful experiments, and I forgot about it.

Then just recently, I discovered acorn tubes. These tiny little tubes were popular in the 1940’s in VHF applications. Their small size resulted in less inter-electrode capacitance, extending their useful frequency range into the VHF. You can find them around on eBay, and from some of the sellers of NOS tubes.

I got interested when I came across a couple of articles by Dave Ingram K4TWJ (sk) in CQ Magazine describing QRP transmitter projects using these little tubes. I tracked down a bunch of his acorn circuits (old CQ magazine content is available behind a pay-wall here), and started accumulating parts to build a 2-watter using two 955 acorn triodes in a push-pull configuration. I have almost all the parts for this project and am looking forward to starting it soon. So what does this have to do with VXOs?

One of the acorn tube articles described an optional VXO circuit that could be substituted for the crystal in the oscillator. This got me thinking about my failed outboard VXO attempt, and I did a search for VXOs for use with tube rigs. I found a number of circuits: although mostly intended for use with solid state QRP rigs, there was one result that hit the jackpot.  I found a page showing a number of external VXOs intended to drive tube rigs done by NT9K,  Bill. (Scroll down this page to find the VXOs. Bill has a very interesting website, well worth looking around while you are there.)
This was exactly what I had tried building on my own a while back, but apparently his circuit worked!

I reached out to Bill and he replied to my email promptly, with the information I needed to try to reproduce the VXO. As is turns out, the original inspiration for the circuit was Dave Ingram again, who described it in another of his CQ columns. Bill provided the critical missing information – how much inductance was needed – and I built one of my own. 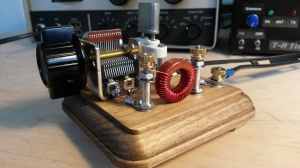 External VXO with HC/6 crystal onboard

I actually had most of the parts on hand, except for the 365 pF air variable capacitor. These can be bought new from Antique Radio Supply fairly reasonably, and they are nicely made units. ARS ships really quickly too, so I had everything I needed in fairly short order.

Construction is point-to-point and the circuit is simple: the variable cap and inductance are placed in series with the crystal, with a short cable to allow plugging the circuit into the crystal socket on the rig. Using Bill’s projects as inspiration, I mounted my circuit on a small wooden plaque obtained from the local craft store. All the hardware is stainless steel and brass. Two posts allow easy interchange of the inductor in the circuit, which is actually quite handy as I tried a couple of different ones before settling on 40 turns wound on a T-68-2 powdered iron core, about 10 uH.

I had the ceramic FT-243 socket on hand and used that because most of my crystals are either vintage FT-243’s, or modern HC/49 style crystals mounted inside vintage FT-241 or FT-243 holders emptied of their out-of-band crystals.

Many VXO circuits are designed to use more than one crystal, all on the same frequency. It is easier to get more of a frequency swing with multiple crystals. But I am only looking for 1 or 2 kHz around the crystal frequency, just enough to work those guys you hear 500 Hz off your rock, running tight passband filtering, who will never hear your call. For that reason, and the fact that I don’t have duplicates of any of my FT-243 rocks, I opted for a single crystal socket. It would be easy enough to add another socket in the future if this gizmo proves useful.

I enjoyed the Thanksgiving weekend at the alt-QTH this year, as we entertained the entire family for Thanksgiving dinner. During the quiet moments, I worked on this little VXO project, and by Friday evening it was ready to try out. The W1TS transmitter lives at the primary QTH, so testing would have to be done with my Knight T-60 transmitter which is currently set up in the shack. I tried a number of different crystals and a couple of inductors, and got a range of results.

The two inductors I tried were hand wound: one was 5 turns of 22 ga wire on an FT-43-50 ferrite core, and the other was 40 turns of the same wire on a T-68-2 iron powder core. The ferrite version measured 13 uH on my digital LC meter – I didn’t measure the other one but the calculated value should be about 10 uH. In testing these coils performed about the same, I went with the red type 2 core, I think it looks nicer.

Results varied a lot with the type and activity of the crystal. Some of my vintage FT-243 rocks only moved a rather disappointing 700 Hz, but the smaller HC/6 types gave much better results with the same setup, swinging about 3.5 kHz. The HC/6 style rocks are the ones in the metal can, with the same pin spacing as the familiar FT-243s. I am looking forward to try this setup with the modern HC/49 crystals mounted in FT-243 holders that I use with the W1TS transmitter. I have a feeling that these will swing pretty well, as they are very active compared to the old vintage rocks. 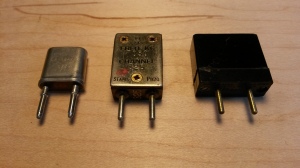 Connection to the rig is with a jumper cable that can be plugged into the rig’s crystal socket. I had a plastic plug on hand that fits the FT-243 socket (left over from an RF pre-amplifier project), and I used a short length of 300 ohm twin-lead for the jumper. This has much less capacitive loading than coax, but a short length of coax would have worked fine as well. 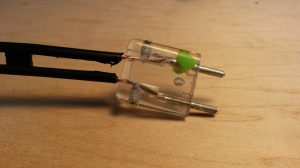 Another plug idea that I have used often is to open up and empty a vintage FT-241 crystal holder (these were mostly used for VHF radios, and are plentiful at frequencies outside the ham bands), drill a hole to accommodate the coax, and use the holder as a plug for the crystal socket. You can do this with an Ft-243 crystal as well, but I think the larger size of the FT-241’s make them easier to use for this purpose. 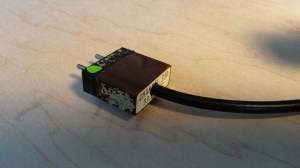 Coax terminated with plug made from an FT-241 crystal holder

So Thanksgiving this year was great: warm house, big family dinner, snowy landscape (yes, we actually had a foot of snow the Tuesday before), and a small homebrew project. Much to be thankful for.